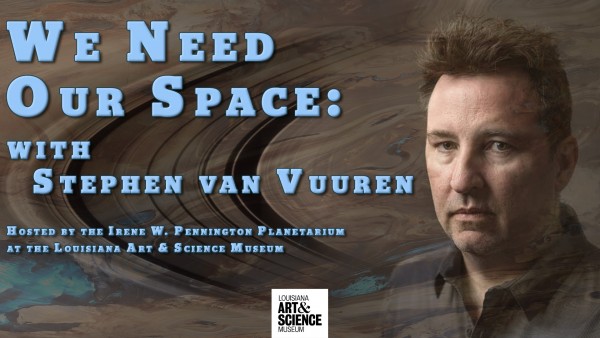 We Need Our Space LIVE: "In Saturn's Rings" with Stephen Van Vuuren

About In Saturn's Rings:
Narrated by Levar Burton, In Saturn’s Rings is a groundbreaking giant-screen adventure that takes audiences on a journey of the mind, heart and spirit, from the Big Bang to the awe-inspiring rings of Saturn.
​
Over 7.5 million mostly unseen REAL images from the Cassini-Huygens Mission to Saturn, Sloan Digital Sky Survey, Hubble Telescope Milky Way time lapses, and more are brilliantly brought to life in this ground-breaking epic immersive journey across space and time.

Sponsored at LASM by the Charles Lamar Family Foundation.
​
About Stephen Van Vuuren:
Stephen Van Vuuren has directed, produced and/or shot over twenty feature and short narrative, documentary, experimental and animation films that have screened at numerous festivals and in cyberspace. Stephen founded SV2 Studios in 2000, which focuses on indie filmmaking and post-production, including digital cinema mastering.
​
He first read about Saturn and Titan in Carl Sagan’s Cosmos as a child. In 2004, Cassini arrived at Saturn barely noticed by the world. Both exulted by the stunning images and disappointed by the lack of interest, he committed to finding a way to make a film that showcased the incredible beauty of Saturn and our entire universe, while exploring the reasons why most people know so little about it...this became In Saturn's Rings!