Conrad Albrizio (1894–1973) is best known for the murals he created for public buildings throughout Louisiana, many of which were commissioned in the 1930s by various New Deal programs during the Great Depression. At this time, a renewed interest in the Old Masters and the burgeoning political mural movement in Mexico, expedited by artists Diego Rivera and Jose Clemente Orozco, inspired the revival of public art in the United States.

One of seven children born to Italian immigrants in New York City, Albrizio originally aspired to be an architect and first came to New Orleans in 1919 to work as an architectural designer for the Hibernia Bank Building. More interested in painting, he returned to New York in 1923 to study at The Art Students League but soon reestablished himself as an architectural draftsman in New Orleans. Traveling abroad in 1929, he furthered his studies in Rome and France where he learned the art of fresco, a technique used by Italian Renaissance artists, such as Michelangelo, to apply paint directly onto wet plaster.

Albrizio resettled in New Orleans and received his first major commission in 1932: 900 square feet of wall space in the new Louisiana State Capitol. Four years later, he moved to Baton Rouge to join the faculty at Louisiana State University, where he taught art until 1954. Similar to his regionalist peers such as Thomas Hart Benton, Albrizio frequently depicted iconic scenes derived from history, agriculture, industry, and even religion. As in his murals, the dynamic composition, high intensity colors, and strong, muscular figures in Jordan lend a powerful, emotional voice to this river baptismal scene.

His numerous early murals are frescos. In 1955, Albrizio traveled to Mexico to study the mosaic murals of Diego Rivera, and he later turned to this medium. Between 1955 and 1965, he executed nine mosaic murals. Due to ill health, he completed his final mural in 1965, resuming easel painting until his final days. 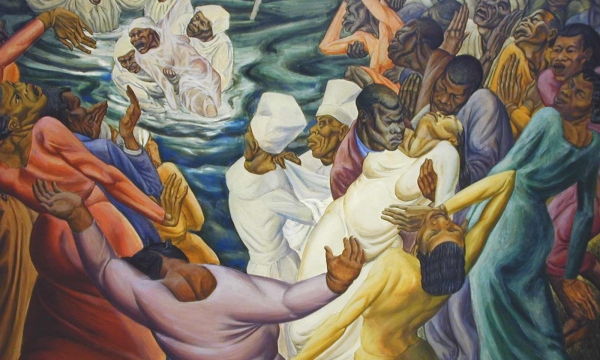