John Marin (1870-1953), an avant-garde artist known for his abstract landscapes and watercolors, grew up in New Jersey. After studying at the Pennsylvania Academy of Fine Arts, he enrolled in the Arts Students League in New York in 1905 but soon left for Europe. There he was introduced to Alfred Stieglitz, whose New York gallery was dedicated to the showing of avant-garde art. Stieglitz became an important supporter and friend.

Marin returned to America in 1911, and exhibited in the famous Armory Show 1913. The following year he discovered the countryside and coastal areas of Maine. From then on he spent his winters in New Jersey but returned to summer in the rural areas of the northeast.

The Tunk Mountain series is considered some of Marin’s finest work. The Louisiana Art & Science Museum is proud to hold a work from this series, Tunk Mountains, Maine, in its permanent collection. An interesting feature of the painting, as with many of Marin’s later works, is the frame. It was designed, carved, colored, and built by the artist. 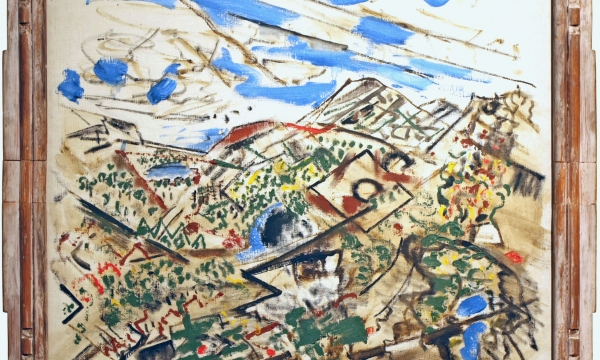