A resident of Ponchatoula, Julia Sims is one of the premier photographers of Louisiana wildlife. She earned the moniker "Swamp Lady" for her devotion to capturing on film the vast Manchac Swamp surrounding Lake Maurepas between Baton Rouge and New Orleans.

Sims documents with eloquent expression not only the lyrical beauty of nature, but also the vibrant energy of the swamp – its trappers, snakes, alligators, nutria, birds, and abundant flowers. Sims’ photographs capture the beauty and mystery of this hidden world and remind us of the need to preserve Louisiana’s wetlands. Backwater Reflections depicts a snowy Egret walking through Spanish Moss that hangs from a cypress in Manchac Swamp.

Sim’s fascination with Louisiana’s wetlands began as a child growing up in Baton Rouge. She has degrees in social work and has been active in the hospice movement.  Her photographs have been published in three books: Manchac Swamp (1996, republished 2008), Vanishing Paradise: Duck Hunting in the Louisiana Marsh (2004), and The Solace of Nature: A Photographer’s Journey (2008). Her work has been featured in virtually every nature magazine, including "National Geographic," National Wildlife," "Nature Conservancy," Sierra," Birder's World," and "Ducks Unlimited." 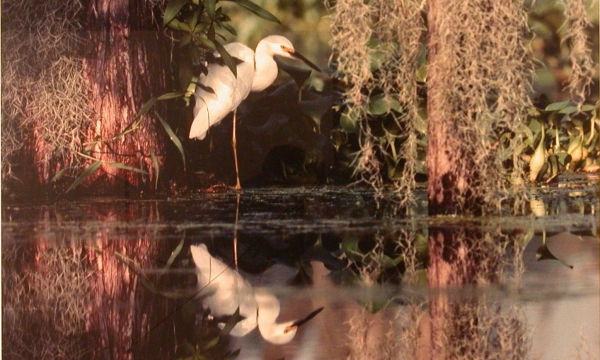