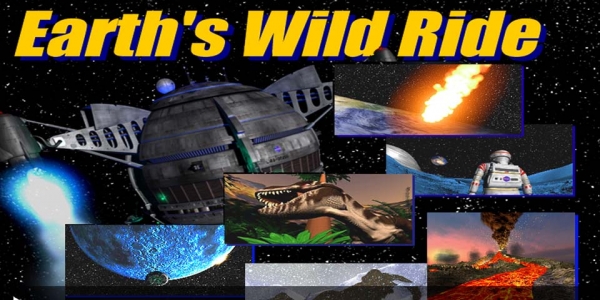 Imagine Earth were a distant place you once called home but could never visit again. What would you remember most about the planet, and how would you describe it to your grandchildren?

Set on the surface of the Moon in the year 2081, a grandfather and granddaughter watch a solar eclipse from scenic cliffs overlooking their moon colony. Conversation leads to contrasts between the moon, the only home the granddaughter knows, and the Earth, where the grandfather has spent most of his life.

As they watch the Moon's shadow move across Earth, the grandfather tells stories of crashing asteroids, erupting volcanoes, roaring dinosaurs, electrifying lightning and booming thunder. Each experience begins with a telescope view of the dynamic Earth in stark contrast with the unchanging lunar landscape.

EARTH'S WILD RIDE is like many tales shared by grandparents over the centuries, except "the old country" is really another planet, always visible from the moon base, but totally unlike the granddaughter's world. While learning about eclipses, the ice age, Earth's water cycle and differences between the Earth and Moon, the audience is taken on a roller-coaster-like ride through canyons of raging rivers and hot flowing lava. Adventure and appreciation for home fill this 20-minute journey back to the Earth.